EXC_BAD_ACCESS means the process tried to access memory in an invalid way, like dereferencing a NULL pointer or writing to read-only memory. This is the hardest kind of crash to debug, because it usually does not have an error message, and some crashes can be very difficult to reproduce and/or occur in code completely unrelated to the problem. This error is very rare in Swift, but if it occurs, you can often get easier-to-debug crashes by reducing compiler optimizations.

Most EXC_BAD_ACCESS errors are caused by trying to dereference a NULL pointer. If this is the case, the address listed in the red arrow will usually be a hexadecimal number that is lower than a normal memory address, often 0x0. Set breakpoints in the debugger or add occasional printf/NSLog statements to find out why that pointer is NULL.

An EXC_BAD_ACCESS that occurs less reliably or makes no sense at all could be the result of a memory management problem. Common problems that can cause this are:

In the Diagnostics section of the Scheme Editor, Xcode includes a few useful tools to help debug memory problems: 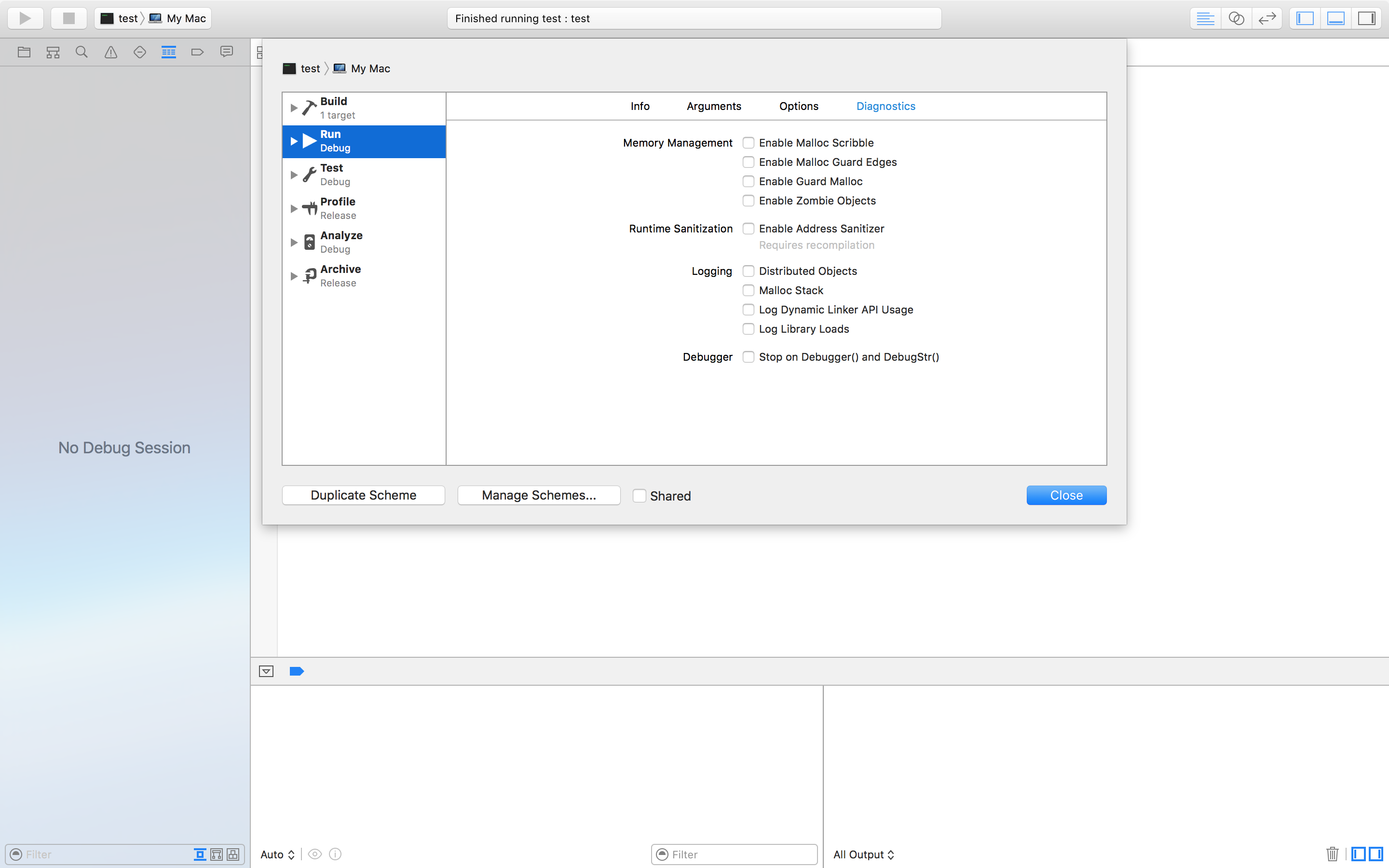 The Address Sanitizer adds lots of checks that will stop the app whenever memory problems occur and provide a helpful error message detailing exactly what happened. Zombie Objects detects problems with deallocated Objective-C objects, but you shouldn't get these kinds of problems with Automatic Reference Counting turned on.

# Finding information about a crash

When your app crashes, Xcode will enter the debugger and show you more information about the crash: 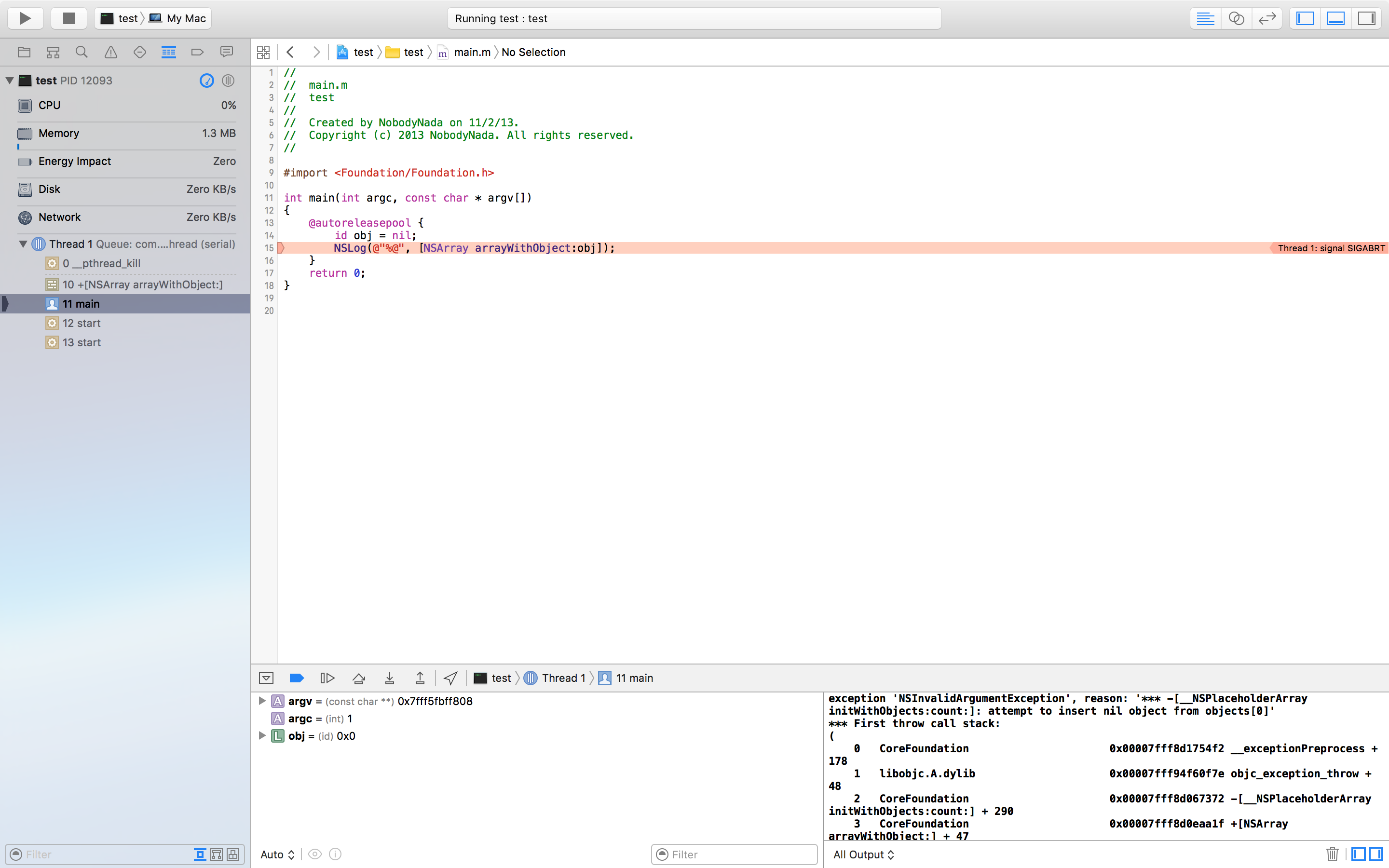 The most important parts are:

The red arrow displays which line of code crashed & why it crashed.

Many crashes log more information to the debugger console. It should automatically appear when the app crashes, but if it's not there, show the debugger by selecting the

(opens new window) button in the top-right corner of Xcode, and show the console by clicking the

(opens new window) button in the bottom-right corner of the debugger.

The stack trace lists the functions the program came from before it got to the code that crashed.

Part of the stack trace is displayed in the Debug Navigator on the left of the screen, and the debugger controls allow you to select a stack frame to view in the debugger: 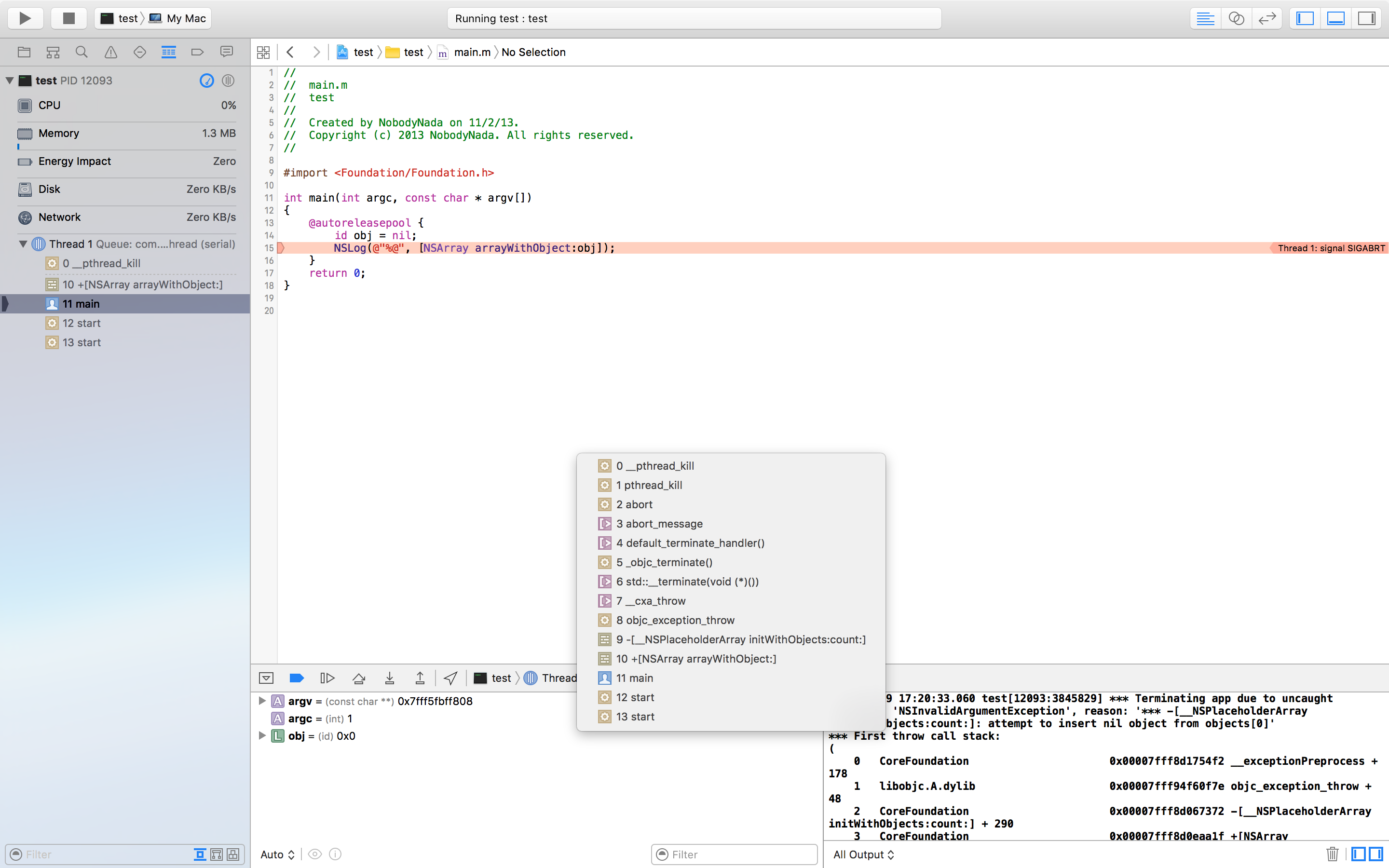 If you enter the bt command at the (lldb) prompt in the debugger and press return, you will get a textual representation of the stack trace that you can copy and paste:

A SIGABRT or an EXC_BAD_INSTRUCTION usually means the app crashed itself intentionally because some check failed. These should log a message to the debugger console with more information; check there for more information.

Many SIGABRTs are caused by uncaught Objective-C exceptions. There are a lot of reasons exceptions can be thrown, and they will always log a lot of helpful information to the console.