# Getting started with R Language

You might wish to install RStudio (opens new window) after you have installed R. RStudio is a development environment for R that simplifies many programming tasks.

Visual Studio (opens new window) (starting from version 2015 Update 3) now features a development environment for R called R Tools (opens new window), that includes a live interpreter, IntelliSense, and a debugging module. If you choose this method, you won't have to install R as specified in the following section.

This will install both R and the R-MacGUI. It will put the GUI in the /Applications/ Folder as R.app where it can either be double-clicked or dragged to the Doc. When a new version is released, the (re)-installation process will overwrite R.app but prior major versions of R will be maintained. The actual R code will be in the /Library/Frameworks/R.Framework/Versions/ directory. Using R within RStudio is also possible and would be using the same R code with a different GUI.

Those choosing the second method should be aware that the maintainer of the Mac fork advises against it, and will not respond to questions about difficulties on the R-SIG-Mac Mailing List.

# For Debian, Ubuntu and derivatives

You can get the version of R corresponding to your distro via apt-get. However, this version will frequently be quite far behind the most recent version available on CRAN. You can add CRAN to your list of recognized "sources".

You can get a more recent version directly from CRAN by adding CRAN to your sources list. Follow the directions (opens new window) from CRAN for more details. Note in particular the need to also execute this so that you can use install.packages(). Linux packages are usually distributed as source files and need compilation:

# For Red Hat and Fedora

R is directly available in the Extra package repo.

More info on using R under Archlinux can be found on the ArchWiki R page (opens new window).

Also, check out the detailed discussion of how, when, whether and why to print a string (opens new window).

You can use function help() or ? to access documentations and search for help in R. For even more general searches, you can use help.search() or ??.

The most basic way to use R is the interactive mode. You type commands and immediately get the result from R.

# Using R as a calculator

Start R by typing R at the command prompt of your operating system or by executing RGui on Windows. Below you can see a screenshot of an interactive R session on Linux: 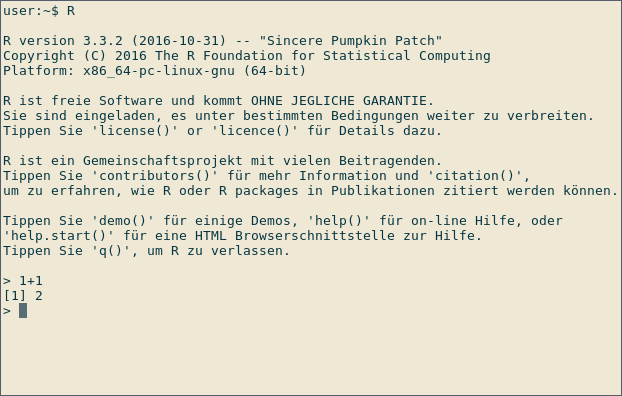 This is RGui on Windows, the most basic working environment for R under Windows: 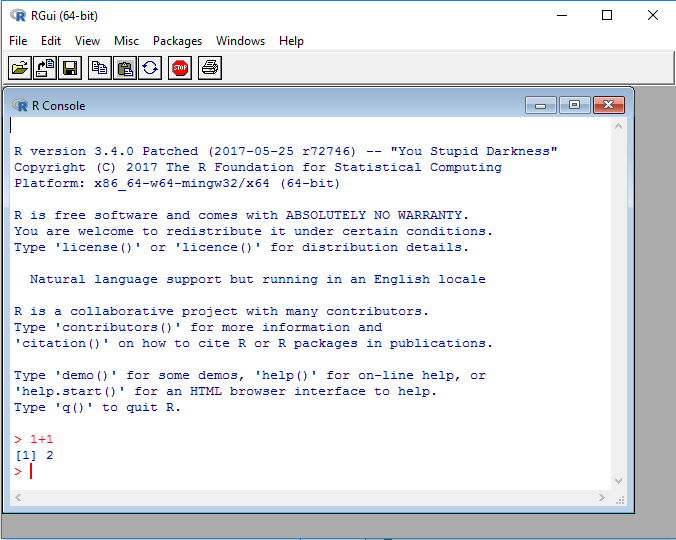 After the > sign, expressions can be typed in. Once an expression is typed, the result is shown by R. In the screenshot above, R is used as a calculator: Type

to immediately see the result, 2. The leading [1] indicates that R returns a vector. In this case, the vector contains only one number (2).

R can be used to generate plots. The following example uses the data set PlantGrowth, which comes as an example data set along with R

Type int the following all lines into the R prompt which do not start with ##. Lines starting with ## are meant to document the result which R will return.

The following plot is created: 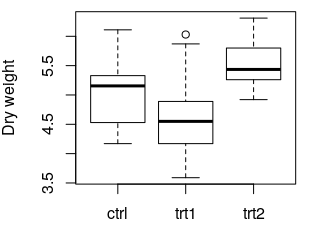 data(PlantGrowth) loads the example data set PlantGrowth, which is records of dry masses of plants which were subject to two different treatment conditions or no treatment at all (control group). The data set is made available under the name PlantGrowth. Such a name is also called a Variable (opens new window).

To load your own data, the following two documentation pages might be helpful:

str(PlantGrowth) shows information about the data set which was loaded. The output indicates that PlantGrowth is a data.frame, which is R's name for a table. The data.frame contains of two columns and 30 rows. In this case, each row corresponds to one plant. Details of the two columns are shown in the lines starting with $: The first column is called weight and contains numbers (num, the dry weight of the respective plant). The second column, group, contains the treatment that the plant was subjected to. This is categorial data, which is called factor in R. Read more information about data frames (opens new window).

The result shows, among others, that there exists a significant difference (Column Pr(>F)), p = 0.01591) between some of the three groups. Post-hoc tests, like Tukey's Test, must be performed to determine which groups' means differ significantly.

Type q() or Ctrl-D to exit from the R session.

To document your research, it is favourable to save the commands you use for calculation in a file. For that effect, you can create R scripts. An R script is a simple text file, containing R commands.

Create a text file with the name plants.R, and fill it with the following text, where some commands are familiar from the code block above:

Execute the script by typing into your terminal (The terminal of your operating system, not an interactive R session like in the previous section!)

The new commands png and dev.off are used for saving the boxplot to disk. The two commands must enclose the plotting command, as shown in the example above. png("FILENAME", width = ..., height = ...) opens a new PNG file with the specified file name, width and height in pixels. dev.off() will finish plotting and saves the plot to disk. No output is saved until dev.off() is called.