Huffman code (opens new window) is a particular type of optimal prefix code that is commonly used for lossless data compression. It compresses data very effectively saving from 20% to 90% memory, depending on the characteristics of the data being compressed. We consider the data to be a sequence of characters. Huffman's greedy algorithm uses a table giving how often each character occurs (i.e., its frequency) to build up an optimal way of representing each character as a binary string. Huffman code was proposed by David A. Huffman (opens new window) in 1951.

Suppose we have a 100,000-character data file that we wish to store compactly. We assume that there are only 6 different characters in that file. The frequency of the characters are given by:

We have many options for how to represent such a file of information. Here, we consider the problem of designing a Binary Character Code in which each character is represented by a unique binary string, which we call a codeword.

The constructed tree will provide us with:

If we use a fixed-length code, we need three bits to represent 6 characters. This method requires 300,000 bits to code the entire file. Now the question is, can we do better?

One thing to remember, we consider here only codes in which no codeword is also a prefix of some other codeword. These are called prefix codes. For variable-length coding, we code the 3-character file abc as 0.101.100 = 0101100, where "." denotes the concatenation.

Prefix codes are desirable because they simplify decoding. Since no codeword is a prefix of any other, the codeword that begins an encoded file is unambiguous. We can simply identify the initial codeword, translate it back to the original character, and repeat the decoding process on the remainder of the encoded file. For example, 001011101 parses uniquely as 0.0.101.1101, which decodes to aabe. In short, all the combinations of binary representations are unique. Say for example, if one letter is denoted by 110, no other letter will be denoted by 1101 or 1100. This is because you might face confusion on whether to select 110 or to continue on concatenating the next bit and select that one.

The technique works by creating a binary tree of nodes. These can stored in a regular array, the size of which depends on the number of symbols, n. A node can either be a leaf node or an internal node. Initially all nodes are leaf nodes, which contain the symbol itself, its frequency and optionally, a link to its child nodes. As a convention, bit '0' represents left child and bit '1' represents right child. Priority queue is used to store the nodes, which provides the node with lowest frequency when popped. The process is described below: 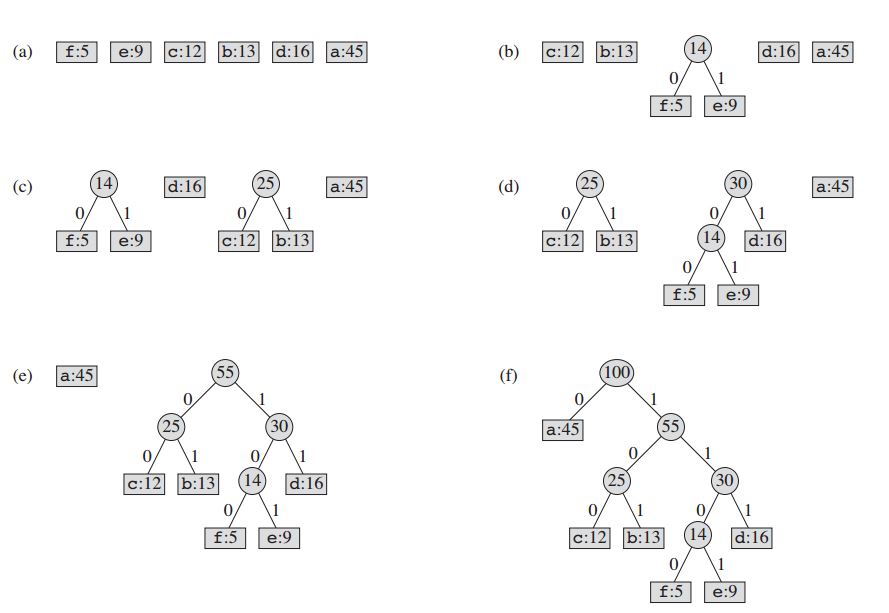 Although linear-time given sorted input, in general cases of arbitrary input, using this algorithm requires pre-sorting. Thus, since sorting takes O(nlogn) time in general cases, both methods have same complexity.

Since n here is the number of symbols in the alphabet, which is typically very small number (compared to the length of the message to be encoded), time complexity is not very important in the choice of this algorithm.

The process of decompression is simply a matter of translating the stream of prefix codes to individual byte value, usually by traversing the Huffman tree node by node as each bit is read from the input stream. Reaching a leaf node necessarily terminates the search for that particular byte value. The leaf value represents the desired character. Usually the Huffman Tree is constructed using statistically adjusted data on each compression cycle, thus the reconstruction is fairly simple. Otherwise, the information to reconstruct the tree must be sent separately. The pseudo-code:

You have a set of things to do (activities). Each activity has a start time and a end time. You aren't allowed to perform more than one activity at a time. Your task is to find a way to perform the maximum number of activities.

For example, suppose you have a selection of classes to choose from.

Remember, you can't take two classes at the same time. That means you can't take class 1 and 2 because they share a common time 10.30 A.M to 11.00 A.M. However, you can take class 1 and 3 because they don't share a common time. So your task is to take maximum number of classes as possible without any overlap. How can you do that?

Lets think for the solution by greedy approach.First of all we randomly chose some approach and check that will work or not.

the sorting order will be 4-->1-->2-->3 .The activity 4--> 1--> 3 will be performed and the activity 2 will be skipped. the maximum 3 activity will be performed. It works for this type of cases. but it will fail for some cases. Lets apply this approach for the case

if we sort the activity by time duration the sort order will be 2--> 3 --->1 . and if we perform activity No. 2 first then no other activity can be performed. But the answer will be perform activity 1 then perform 3 . So we can perform maximum 2 activity.So this can not be a solution of this problem. We should try a different approach.

Given a money system, is it possible to give an amount of coins and how to find a minimal set of coins corresponding to this amount.

Canonical money systems. For some money system, like the ones we use in the real life, the "intuitive" solution works perfectly. For example, if the different euro coins and bills (excluding cents) are 1€, 2€, 5€, 10€, giving the highest coin or bill until we reach the amount and repeating this procedure will lead to the minimal set of coins.

We can do that recursively with OCaml :

These systems are made so that change-making is easy. The problem gets harder when it comes to arbitrary money system.

General case. How to give 99€ with coins of 10€, 7€ and 5€? Here, giving coins of 10€ until we are left with 9€ leads obviously to no solution. Worse than that a solution may not exist. This problem is in fact np-hard, but acceptable solutions mixing greediness and memoization exist. The idea is to explore all the possibilies and pick the one with the minimal number of coins.

To give an amount X > 0, we choose a piece P in the money system, and then solve the sub-problem corresponding to X-P. We try this for all the pieces of the system. The solution, if it exists, is then the smallest path that led to 0.

Here an OCaml recursive function corresponding to this method. It returns None, if no solution exists.

Note: We can remark that this procedure may compute several times the change set for the same value. In practice, using memoization to avoid these repetitions leads to faster (way faster) results.

Given items as (value, weight) we need to place them in a knapsack (container) of a capacity k. Note! We can break items to maximize value!

A greedy algorithm is an algorithm in which in each step we choose the most beneficial option in every step without looking into the future. The choice depends only on current profit.

Greedy approach is usually a good approach when each profit can be picked up in every step, so no choice blocks another one.