Expressions in C++ are assigned a particular value category, based on the result of those expressions. Value categories for expressions can affect C++ function overload resolution.

The other property is whether it is legal to implicitly move from the expression's value. Or more specifically, whether the expression, when used as a function parameter, will bind to r-value parameter types or not.

This graph serves as an illustration: 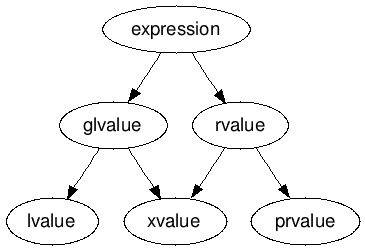 An rvalue expression is any expression which can be implicitly moved from, regardless of whether it has identity.

std::string has a constructor which takes a single parameter of type std::string&&, commonly called a "move constructor". However, the value category of the expression str is not an rvalue (specifically it is an lvalue), so it cannot call that constructor overload. Instead, it calls the const std::string& overload, the copy constructor.

Line 3 changes things. The return value of std::move is a T&&, where T is the base type of the parameter passed in. So std::move(str) returns std::string&&. A function call who's return value is an rvalue reference is an rvalue expression (specifically an xvalue), so it may call the move constructor of std::string. After line 3, str has been moved from (who's contents are now undefined).

Line 4 passes a temporary to the assignment operator of std::string. This has an overload which takes a std::string&&. The expression std::string("new value") is an rvalue expression (specifically a prvalue), so it may call that overload. Thus, the temporary is moved into str, replacing the undefined contents with specific contents.

Line 5 creates a named rvalue reference called str_ref that refers to str. This is where value categories get confusing.

To move it, we would have to employ std::move again.

An xvalue (eXpiring value) expression is an expression which has identity and represents an object which can be implicitly moved from. The general idea with xvalue expressions is that the object they represent is going to be destroyed soon (hence the "eXpiring" part), and therefore implicitly moving from them is fine.

A prvalue (pure-rvalue) expression is an expression which lacks identity, whose evaluation is typically used to initialize an object, and which can be implicitly moved from. These include, but are not limited to:

The built-in addressof operator (&) cannot be applied on these expressions.

The typical lvalue is simply a name, but lvalues can come in other flavors as well:

Additionally, while most literals (e.g. 4, 'x', etc.) are prvalues, string literals are lvalues.

If an expression has a name, it's a glvalue: