# Work with a new instance every time.

Being a class module, a form is therefore a blueprint for an object. Because a form can hold state and data, it's a better practice to work with a new instance of the class, rather than with the default/global one:

Working with the default instance can lead to subtle bugs when the form is closed with the red "X" button and/or when Unload Me is used in the code-behind.

A form should be concerned with nothing but presentation: a button Click handler that connects to a database and runs a parameterized query based on user input, is doing too many things.

Instead, implement the applicative logic in the code that's responsible for displaying the form, or even better, in dedicated modules and procedures.

Write the code in such a way that the UserForm is only ever responsible for knowing how to display and collect data: where the data comes from, or what happens with the data afterwards, is none of its concern.

# Caller shouldn't be bothered with controls.

Make a well-defined model for the form to work with, either in its own dedicated class module, or encapsulated within the form's code-behind itself - expose the model with Property Get procedures, and have the client code work with these: this makes the form an abstraction over controls and their nitty-gritty details, exposing only the relevant data to the client code.

Forms typically have a Close button, and prompts/dialogs have Ok and Cancel buttons; the user may close the form using the form's control box (the red "X" button), which destroys the form instance by default (another good reason to work with a new instance every time).

The simplest way to handle the QueryClose event is to set the Cancel parameter to True, and then to hide the form instead of closing it:

That way the "X" button will never destroy the instance, and the caller can safely access all the public members.

The code that creates an object should be responsible for destroying it: it's not the form's responsibility to unload and terminate itself.

Avoid using Unload Me in a form's code-behind. Call Me.Hide instead, so that the calling code can still use the object it created when the form closes.

Use the properties toolwindow (F4) to carefully name each control on a form. The name of a control is used in the code-behind, so unless you're using a refactoring tool that can handle this, renaming a control will break the code - so it's much easier to do things right in the first place, than try to puzzle out exactly which of the 20 textboxes TextBox12 stands for.

The problem is that when e.g. the UI gets redesigned and a ComboBox changes to a ListBox, the name needs to change to reflect the new control type: it's better to name controls for what they represent, rather than after their control type - to decouple the code from the UI as much as possible.

Whichever style is chosen, anything is better than leaving all controls their default names. Consistency in naming style is ideal, too.

The QueryClose event is raised whenever a form is about to be closed, whether it's via user action or programmatically. The CloseMode parameter contains a VbQueryClose enum value that indicates how the form was closed:

For better readability, it's best to use these constants instead of using their value directly.

Given a form with a Cancel button 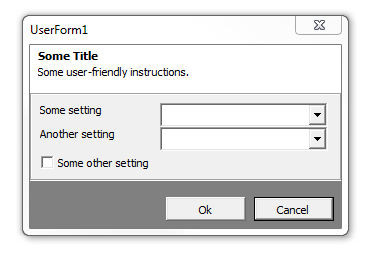 The calling code could then display the form, and know whether it was cancelled:

The IsCancelled property returns True when the Cancel button is clicked, or when the user closes the form using the control box.