To be able to debug an application is very important to understand the flow of an application's logic and data. It helps solving logical bugs and adds value to the programming experience and code quality. Two popular gems for debugging are debugger (for ruby 1.9.2 and 1.9.3) and byebug (for ruby >= 2.x).

If you want to debug .html.erb files, break point will be added as <% debugger %>

Debugging by raising exceptions is far easier than squinting through print log statements, and for most bugs, its generally much faster than opening up an irb debugger like pry or byebug. Those tools should not be your first step.

1. Fast Method: Raise an `Exception` then and `.inspect` its result

The fastest way to debug Ruby (especially Rails) code is to raise an exception along the execution path of your code while calling .inspect on the method or object (e.g. foo):

In the above code, raise triggers an Exception that halts execution of your code, and returns an error message that conveniently contains .inspect information about the object/method (i.e. foo) on the line that you're trying to debug.

This technique is useful for quickly examining an object or method (e.g. is it nil?) and for immediately confirming whether a line of code is even getting executed at all within a given context.

Only after you have information about the state of your codes execution flow should you consider moving to a ruby gem irb debugger like pry or byebug where you can delve more deeply into the state of objects within your execution path.

To use the byebug gem for debugging in Rails:

This byebug variable when executed will open up an ruby IRB session of your code, giving you direct access to the state of objects as they are at that point in the code's execution.

IRB debuggers like Byebug are useful for deeply analyzing the state of your code as it executes. However, they are more time consuming procedure compared to raising errors, so in most situations they should not be your first step.

When you are trying to debug a problem, good advice is to always: Read The !@#$ing Error Message (RTFM)

That means reading error messages carefully and completely before acting so that you understand what it's trying to tell you. When you debug, ask the following mental questions, in this order, when reading an error message:

In the stack trace pay particular attention to lines of code that come from your project (e.g. lines starting with app/... if you are using Rails). 99% of the time the problem is with your own code.

To illustrate why interpreting in this order is important...

E.g. a Ruby error message that confuses many beginners:

You execute code that at some point executes as such:

and you get an error that states:

Beginners see this error and think the problem is that the method bar is undefined. It's not. In this error the real part that matters is:

for Nil:nilClass means that @foo is Nil! @foo is not a Foo instance variable! You have an object that is Nil. When you see this error, it's simply ruby trying to tell you that the method bar doesn't exist for objects of the class Nil. (well duh! since we are trying to use a method for an object of the class Foo not Nil).

Unfortunately, due to how this error is written (undefined method "bar" for Nil:nilClass) its easy to get tricked into thinking this error has to do with bar being undefined. When not read carefully this error causes beginners to mistakenly go digging into the details of the bar method on Foo, entirely missing the part of the error that hints that the object is of the wrong class (in this case: nil). It's a mistake that's easily avoided by reading error messages in their entirety.

Always carefully read the entire error message before beginning any debugging. That means: Always check the class type of an object in an error message first, then its methods, before you begin sleuthing into any stacktrace or line of code where you think the error may be occurring. Those 5 seconds can save you 5 hours of frustration.

# Debugging in your IDE

Every good IDE provides a GUI for interactively debugging Ruby (and thus Rails) applications where you can add breakpoints, watches, auto pausing on exception and allows you to follow the code execution even step by step, line by line.

For example, take a look at one of the best Ruby IDE's, RubyMine's debugging features on the picture 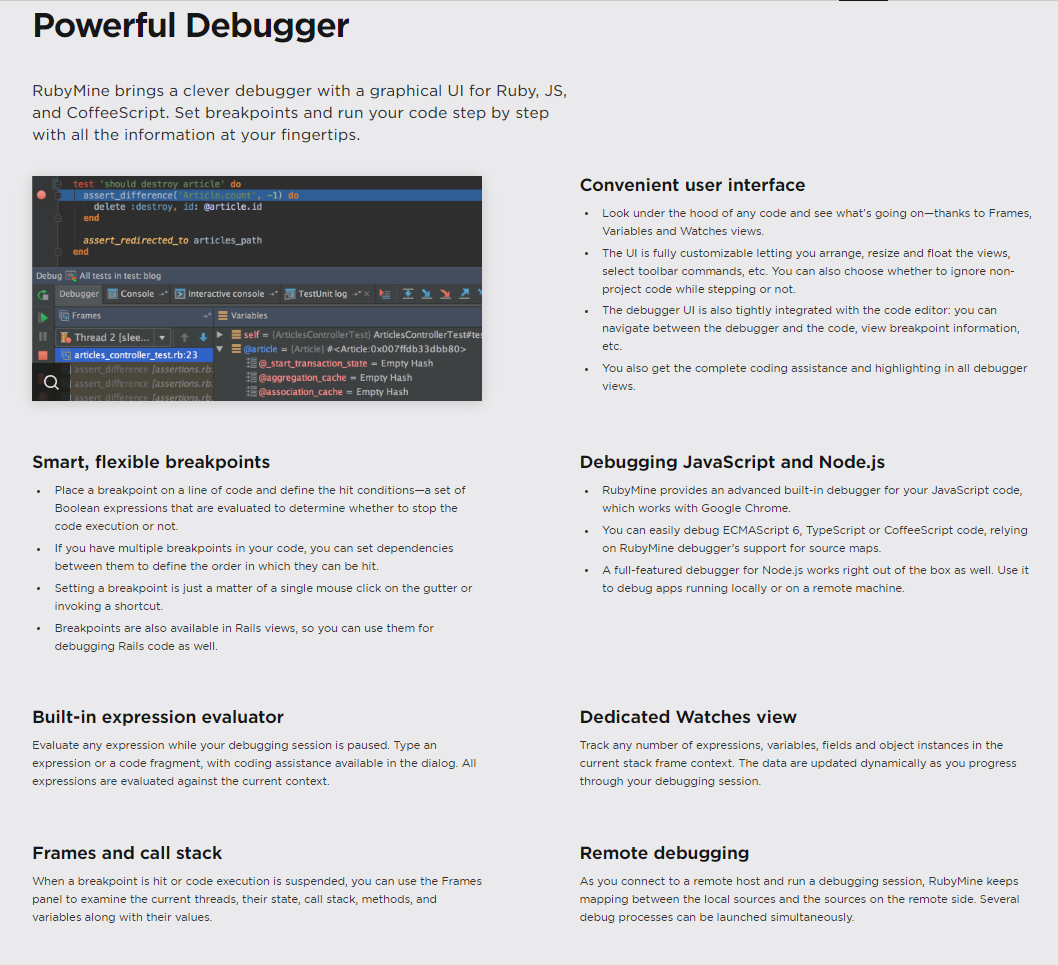 pry is a powerful tool that can be used to debug any ruby application. Setting up a ruby-on-rails application with this gem is very easy and straightforward.

To start debugging your application with pry

i) Debugging a Controller

In this example, the rails server pauses with a pry console at the break-point when you try to visit a page routing to show action on UsersController. You can inspect params object and make ActiveRecord query on User model from that breakpoint

In this example, the break-point pauses with pry console when the users/show page is pre-compiled in the rails server before sending it back to the client's browser. This break-point allows to debug correctness of @user.logged_in? when it is misbehaving.

In this example, the break-point can be used to debug User model's instance method full_name when this method is called from anywhere in the application.

In conclusion, pry is a powerful debugging tool for rails application with easy setup and straightforward debugging guideline. Give this a try.