# Getting started with react-native

Paste that at a Terminal prompt.

You will need Xcode for iOS and Android Studio for android, node.js, the React Native command line tools, and Watchman.

We recommend installing node and watchman via Homebrew.

Watchman (opens new window) is a tool by Facebook for watching changes in the filesystem. It is highly recommended you install it for better performance. It is optional.

If you get a permission error, try with sudo:

For iOS the easiest way to install Xcode is via the Mac App Store. And for android download and install Android Studio.

If you plan to make changes in Java code, we recommend Gradle Daemon which speeds up the build.

You should see your new app running in the iOS Simulator shortly. react-native run-ios is just one way to run your app - you can also run it directly from within Xcode or Nuclide.

Now that you have successfully run the app, let's modify it.

# Start the terminal and run the following commands to install nodeJS:

# If node command is unavailable

# check if you have the current version

# Run the npm to install the react-native

On the terminal run the command

Select "SDK Platforms" from within the SDK Manager and you should see a blue checkmark next to "Android 7.0 (Nougat)". In case it is not, click on the checkbox and then "Apply". 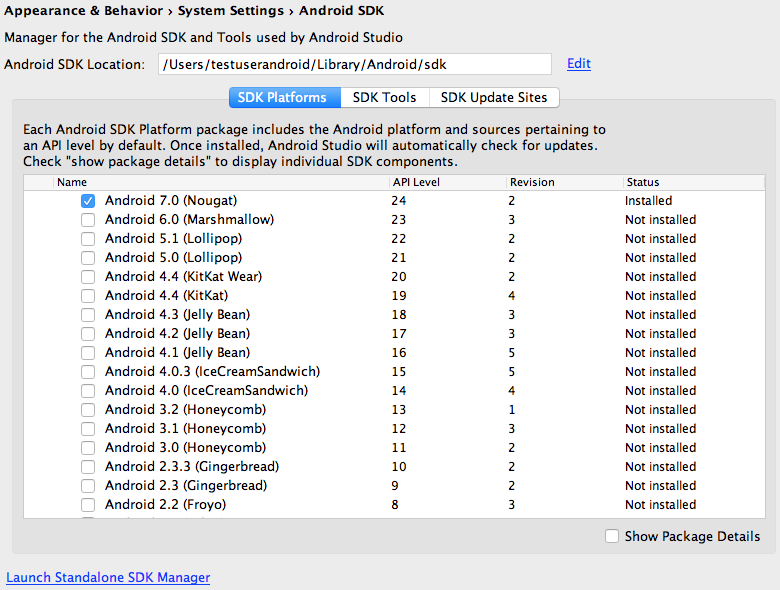 # Obs: Always check if the version on android/app/build.gradle is the same as the Build Tools downloaded on your android SDK

# Open Android AVD to set up a virtual android. Execute the command line:

Follow the instructions to create a virtual device and start it

Open another terminal and run the command lines:

Start the command line as an administrator run the following commands:

Restart command line as an administrator so you can run npm

After running the last command copy the directory that react-native was installed in. You will need this for Step 4. I tried this on two computers in one case it was: C:\Program Files (x86)\Nodist\v-x64\6.2.2. In the other it was: C:\Users\admin\AppData\Roaming\npm

A Step by Step guide with images can be found here for this section. (opens new window)

Open the Environment Variables window by navigating to:

In the bottom section find the "Path" System Variable and add the location that react-native was installed to in step 1.

If you haven't added an ANDROID_HOME environment variable you will have to do that here too. While still in the "Environment Variables" window, add a new System Variable with the name "ANDROID_HOME" and value as the path to your android sdk.

Then restart the command line as an admin so you can run react-native commands in it.

4) Run your project Start an emulator from android studio Navigate to the root directory of your project in command line and run it:

You may run into dependency issues. For example, there may be an error that you do not have the correct build tools version. To fix this you will have to open the sdk manager in Android Studio (opens new window) and download the build tools from there.

To refresh the ui you can press the r key twice while in the emulator and running the app. To see developer options you can press ctrl + m.

With React Native, you don't build a “mobile web app”, an “HTML5 app”, or a “hybrid app”. You build a real mobile app that's indistinguishable from an app built using Objective-C or Java. React Native uses the same fundamental UI building blocks as regular iOS and Android apps. You just put those building blocks together using JavaScript and React.