Let's take the transpose using the shorthand .' (with the period). The output is as expected, the transposed form of C.

Now, let's use ' (without the period). We see, that in addition to the transposition, the complex values have been transformed to their complex conjugates as well.

# Do not name a variable with an existing function name

There is already a function sum() (opens new window). As a result, if we name a variable with the same name

we will get the cryptic error:

How can we check if a function already exists to avoid this conflict?

Use which() (opens new window) with the -all flag:

This output is telling us that sum is first a variable and that the following methods (functions) are shadowed by it, i.e. MATLAB will first try to apply our syntax to the variable, rather than using the method.

# Be aware of floating point inaccuracy

There are infinitely many floating points numbers and they can be infinitely long (e.g. π), thus being able to represent them perfectly would require infinitely amount of memory. Seeing this was a problem, a special representation for "real number" storage in computer was designed, the IEEE 754 standard (opens new window). In short, it describes how computers store this type of numbers, with an exponent and mantissa, as,

With limited amount of bits for each of these, only a finite precision can be achieved. The smaller the number, smaller the gap between possible numbers (and vice versa!). You can try your real numbers in this online demo (opens new window).

Be aware of this behavior and try to avoid all floating points comparison and their use as stopping conditions in loops. See below two examples:

It is poor practice to use floating point comparison as shown by the precedent example. You can overcome it by taking the absolute value of their difference and comparing it to a (small) tolerance level.

Below is another example, where a floating point number is used as a stopping condition in a while loop:**

See these questions for more information about floating point inaccuracy:

# What you see is NOT what you get: char vs cellstring in the command window

This a basic example aimed at new users. It does not focus on explaining the difference between char and cellstring.

It might happen that you want to get rid of the ' in your strings, although you never added them. In fact, those are artifacts that the command window uses to distinguish between some types.

Note how the single quotes and the indentation are artifacts to notify us that c is a cellstring rather than a char. The string is in fact contained in the cell, i.e.

This is MATLAB's long-winded way of saying that it cannot find the function that you're trying to call. There are a number of reasons you could get this error:

# That function was introduced after your current version of MATLAB

The MATLAB online documentation provides a very nice feature which allows you to determine in what version a given function was introduced. It is located in the bottom left of every page of the documentation: 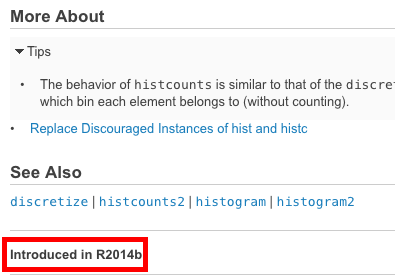 Compare this version with your own current version (ver (opens new window)) to determine if this function is available in your particular version. If it's not, try searching the archived versions of the documentation (opens new window) to find a suitable alternative in your version.

# You don't have that toolbox!

The base MATLAB installation has a large number of functions; however, more specialized functionality is packaged within toolboxes and sold separately by the Mathworks. The documentation for all toolboxes is visible whether you have the toolbox or not so be sure to check and see if you have the appropriate toolbox.

To check which toolbox a given function belongs to, look to the top left of the online documentation to see if a specific toolbox is mentioned. 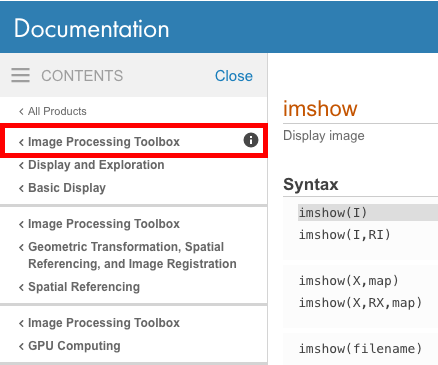 You can then determine which toolboxes your version of MATLAB has installed by issuing the ver (opens new window) command which will print a list of all installed toolboxes.

If you do not have that toolbox installed and want to use the function, you will need to purchase a license for that particular toolbox from The Mathworks.

# The use of "i" or "j" as imaginary unit, loop indices or common variable.

Because the symbols i and j can represent significantly different things in MATLAB, their use as loop indices has split the MATLAB user community since ages. While some historic performance reasons could help the balance lean to one side, this is no longer the case and now the choice rest entirely on you and the coding practices you choose to follow.

The current official recommendations from Mathworks are:

and as you should expect:

# Using them as a variable (for loop indices or other variable)

MATLAB allows using built-in function name as a standard variable. In this case the symbol used will not point to the built-in function any more but to your own user defined variable. This practice, however, is not generally recommended as it can lead to confusion, difficult debugging and maintenance (see other example do-not-name-a-variable-with-an-existing-function-name (opens new window)).

If you are ultra pedantic about respecting conventions and best practices, you will avoid using them as loop indices in this language. However, it is allowed by the compiler and perfectly functional so you may also choose to keep old habits and use them as loop iterators.

Note that loop indices do not go out of scope at the end of the loop, so they keep their new value.

In the case you use them as variable, make sure they are initialised before they are used. In the loop above MATLAB initialise them automatically when it prepare the loop, but if not initialised properly you can quickly see that you may inadvertently introduce complex numbers in your result.

If later on, you need to undo the shadowing of the built-in function (=e.g. you want i and j to represent the imaginary unit again), you can clear the variables:

You understand now the Mathworks reservation about using them as loop indices if you intend to use them in complex arithmetic. Your code would be riddled with variable initialisations and clear commands, best way to confuse the most serious programmer (yes you there!...) and program accidents waiting to happen.

If no complex arithmetic is expected, the use of i and j is perfectly functional and there is no performance penalty.

# Using them as imaginary unit:

If your code has to deal with complex numbers, then i and j will certainly come in handy. However, for the sake of disambiguation and even for performances, it is recommended to use the full form instead of the shorthand syntax. The full form is 1i (or 1j).

They do represent the same value sqrt(-1), but the later form:

Note that the full syntax 1i is valid with any number preceding the symbol:

This is the only function which you can stick with a number without an operator between them.

While their use as imaginary unit OR variable is perfectly legal, here is just a small example of how confusing it could get if both usages get mixed:

Let's override i and make it a variable:

Now i is a variable (holding the value 3), but we only overrid the shorthand notation of the imaginary unit, the full form is still interpreted correctly:

Which now lets us build the most obscure formulations. I let you assess the readability of all the following constructs:

As you can see, each value in the array above return a different result. While each result is valid (provided that was the initial intent), most of you will admit that it would be a proper nightmare to read a code riddled with such constructs.

Often beginning MATLAB developers will use MATLAB's editor to write and edit code, in particular custom functions with inputs and outputs. There is a Run button at the top that is available in recent versions of MATLAB:

Once the developer finishes with the code, they are often tempted to push the Run button. For some functions this will work fine, but for others they will receive a Not enough input arguments error and be puzzled about why the error occurs.

To demonstrate this issue, suppose we have a function mult that simply multiplies two matrices together:

In recent versions of MATLAB, if you wrote this function and pushed the Run button, it will give you the error we expect:

There are two ways to resolve this issue:

# Method #1 - Through the Command Prompt

Simply create the inputs you need in the Command Prompt, then run the function using those inputs you have created:

# Method #2 - Interactively through the Editor

Underneath the Run button, there is a dark black arrow. If you click on that arrow, you can specify the variables you would like to get from the MATLAB workspace by typing the way you want to call the function exactly as how you have seen in method #1. Be sure that the variables you are specifying inside the function exist in the MATLAB workspace:

A common mistake MATLAB coders have, is using the length function for matrices (as opposed to vectors, for which it is intended). The length function, as mentioned in its documentation (opens new window), "returns the length of the largest array dimension" of the input.

For vectors, the return value of length has two different meanings:

Unlike in vectors, the above values would not be equal for arrays of more than one non-singleton (i.e. whose size is larger than 1) dimension. This is why using length for matrices is ambiguous. Instead, using one of the following functions is encouraged, even when working with vectors, to make the intention of the code perfectly clear:

This is especially important when writing "future-proof", vectorized (opens new window) library functions, whose inputs are not known in advance, and can have various sizes and shapes.

# Watch out for array size changes

Some common operations in MATLAB, like differentiation or integration, output results that have a different amount of elements than the input data has. This fact can easily be overlooked, which would usually cause errors like Matrix dimensions must agree. Consider the following example:

Let's say we want to plot these results. We take a look at the array sizes and see:

The array is one element shorter!

Now imagine you have measurement data of positions over time and want to calculate jerk(t), you will get an array 3 elements less than the time array (because the jerk is the position differentiated 3 times).

return errors, because the matrix dimensions do not agree.

To calculate operations like above you have to adjust the bigger array size to fit the smaller one. You could also run a regression (polyfit) with your data to get a polynomial for your data.