This topic illustrates how to avoid adding unwanted files (or file changes) in a Git repo. There are several ways (global or local .gitignore, .git/exclude, git update-index --assume-unchanged, and git update-index --skip-tree), but keep in mind Git is managing content, which means: ignoring actually ignores a folder content (i.e. files). An empty folder would be ignored by default, since it cannot be added anyway.

# Ignoring files and directories with a .gitignore file

You can make Git ignore certain files and directories — that is, exclude them from being tracked by Git — by creating one or more .gitignore (opens new window) files in your repository.

In software projects, .gitignore typically contains a listing of files and/or directories that are generated during the build process or at runtime. Entries in the .gitignore file may include names or paths pointing to:

When a file or directory is ignored, it will not be:

In the unusual case that you need to ignore tracked files, special care should be taken. See: Ignore files that have already been committed to a Git repository (opens new window).

Here are some generic examples of rules in a .gitignore file, based on glob file patterns (opens new window):

# Other forms of .gitignore

.gitignore files are intended to be committed as part of the repository. If you want to ignore certain files without committing the ignore rules, here are some options:

Furthermore, you can ignore local changes to tracked files without changing the global git configuration with:

You can use git clean -X to cleanup ignored files:

# Checking if a file is ignored

You can pass filenames on the command line, and git check-ignore will list the filenames that are ignored. For example:

Here, only *.o files are defined in .gitignore, so Readme.md is not listed in the output of git check-ignore.

If you want to see line of which .gitignore is responsible for ignoring a file, add -v to the git check-ignore command:

From Git 1.7.6 onwards you can also use git status --ignored in order to see ignored files. You can find more info on this in the official documentation (opens new window) or in Finding files ignored by .gitignore (opens new window).

# Exceptions in a .gitignore file

If you ignore files by using a pattern but have exceptions, prefix an exclamation mark(!) to the exception. For example:

The above example instructs Git to ignore all files with the .txt extension except for files named important.txt.

If the file is in an ignored folder, you can NOT re-include it so easily:

In this example all .txt files in the folder would remain ignored.

To have Git ignore certain files across all repositories you can create a global .gitignore (opens new window) with the following command in your terminal or command prompt:

Git will now use this in addition to each repository's own .gitignore (opens new window) file. Rules for this are:

This file is a good place to keep platform, machine or user specific ignores, e.g. OSX .DS_Store, Windows Thumbs.db or Vim *.ext~ and *.ext.swp ignores if you don't want to keep those in the repository. So one team member working on OS X can add all .DS_STORE and _MACOSX (which is actually useless), while another team member on Windows can ignore all thumbs.bd

# Ignore files that have already been committed to a Git repository

If you have already added a file to your Git repository and now want to stop tracking it (so that it won't be present in future commits), you can remove it from the index:

This will remove the file from the repository and prevent further changes from being tracked by Git. The --cached option will make sure that the file is not physically deleted.

Note that previously added contents of the file will still be visible via the Git history.

Keep in mind that if anyone else pulls from the repository after you removed the file from the index, their copy will be physically deleted.

You can make Git pretend that the working directory version of the file is up to date and read the index version instead (thus ignoring changes in it) with "skip worktree (opens new window)" bit:

Writing is not affected by this bit, content safety is still first priority. You will never lose your precious ignored changes; on the other hand this bit conflicts with stashing: to remove this bit, use

It is sometimes wrongly recommended to lie to Git and have it assume that file is unchanged without examining it. It looks at first glance as ignoring any further changes to the file, without removing it from its index:

This will force git to ignore any change made in the file (keep in mind that if you pull any changes to this file, or you stash it, your ignored changes will be lost)

If you want git to "care" about this file again, run the following command:

.gitignore ignores files locally, but it is intended to be committed to the repository and shared with other contributors and users. You can set a global .gitignore, but then all your repositories would share those settings.

If you want to ignore certain files in a repository locally and not make the file part of any repository, edit .git/info/exclude inside your repository.

# Ignoring a file in any directory

To ignore a file foo.txt in any directory you should just write its name:

If you want to ignore the file only in part of the tree, you can specify the subdirectories of a specific directory with ** pattern:

Or you can create a .gitignore file in the bar/ directory. Equivalent to the previous example would be creating file bar/.gitignore with these contents:

# Ignoring subsequent changes to a file (without removing it)

Sometimes you want to have a file held in Git but ignore subsequent changes.

Tell Git to ignore changes to a file or directory using update-index:

The above command instructs Git to assume my-file.txt hasn't been changed, and not to check or report changes. The file is still present in the repository.

This can be useful for providing defaults and allowing local environment overrides, e.g.:

output.log in the examples directory is valid and required for the project to gather an understanding while the one beneath src/ is created while debugging and should not be in the history or part of the repository.

There are two ways to ignore this file. You can place an absolute path into the .gitignore file at the root of the working directory:

Alternatively, you can create a .gitignore file in the src/ directory and ignore the file that is relative to this .gitignore:

If you are unsure which rules to list in your .gitignore file, or you just want to add generally accepted exceptions to your project, you can choose or generate a .gitignore file:

Many hosting services such as GitHub and BitBucket offer the ability to generate .gitignore files based upon the programming languages and IDEs you may be using: 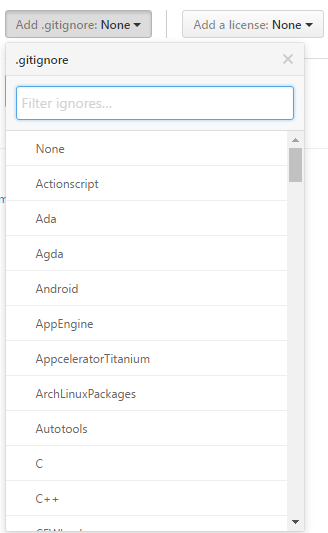 It is not possible to add and commit an empty folder in Git due to the fact that Git manages files and attaches their directory to them, which slims down commits and improves speed. To get around this, there are two methods:

This command just makes a blank .gitkeep file in the current directory

Another hack for this is very similar to the above and the same steps can be followed, but instead of a .gitkeep, just use a dummy.txt instead. This has the added bonus of being able to easily create it in Windows using the context menu. And you get to leave funny messages in them too.You can also use .gitkeep file to track the empty directory. .gitkeep normally is an empty file that is added to track the empty directoy.

You can list all files ignored by git in current directory with command:

...than result of the command will be:

If you want to list recursively ignored files in directories, you have to use additional parameter - --untracked-files=all

# Ignoring only part of a file [stub]

Sometimes you may want to have local changes in a file you don't want to commit or publish. Ideally local settings should be concentrated in a separate file that can be placed into .gitignore, but sometimes as a short-term solution it can be helpful to have something local in a checked-in file.

You can make Git "unsee" those lines using clean filter. They won't even show up in diffs.

Create "nocommit" filter by adding this to Git config file like .git/config:

Add (or create) this to .git/info/attributes or .gitmodules:

And your NOCOMMIT lines are hidden from Git.

To set ignore flag on a tracked file, use the command update-index (opens new window):

To revert this, use:

You can add this snippet to your global git config (opens new window) to have more convenient git hide, git unhide and git hidden commands:

If you want to watch this file again for the changes, use

When --assume-unchanged flag is specified, the user promises not to change the file and allows Git to assume that the working tree file matches what is recorded in the index.Git will fail in case it needs to modify this file in the index e.g. when merging in a commit; thus, in case the assumed-untracked file is changed upstream, you will need to handle the situation manually.The focus lies on performance in this case.

While --skip-worktree flag is useful when you instruct git not to touch a specific file ever because the file is going to be changed locally and you don't want to accidentally commit the changes (i.e configuration/properties file configured for a particular environment). Skip-worktree takes precedence over assume-unchanged when both are set.

Sometimes it happens that a file was being tracked by git, but in a later point in time was added to .gitignore, in order to stop tracking it. It's a very common scenario to forget to clean up such files before its addition to .gitignore. In this case, the old file will still be hanging around in the repository.

To fix this problem, one could perform a "dry-run" removal of everything in the repository, followed by re-adding all the files back. As long as you don't have pending changes and the --cached parameter is passed, this command is fairly safe to run: