An image can be created using image* functions (opens new window), where * is the file format.

They have this syntax in common:

# Saving to a file

If you want to save the image to a file, you can pass the filename, or an opened file stream, as $to. If you pass a stream, you don't need to close it, because GD will automatically close it.

For example, to save a PNG file:

When using fopen, make sure to use the b flag rather than the t flag, because the file is a binary output.

Do not try to pass fopen("php://temp", $f) or fopen("php://memory", $f) to it. Since the stream is closed by the function after the call, you will be unable to use it further, such as to retrieve its contents.

# Output as an HTTP response

If you want to directly return this image as the response of the image (e.g. to create dynamic badges), you don't need to pass anything (or pass null) as the second argument. However, in the HTTP response, you need to specify your content type:

$mimeType is the MIME type of the format you are returning. Examples include image/png, image/gif and image/jpeg.

# Writing into a variable

There are two ways to write into a variable.

You may have many reasons that you don't want to use output buffering. For example, you may already have OB on. Therefore, an alternative is needed.

Using the stream_wrapper_register function, a new stream wrapper can be registered. Hence, you can pass a stream to the image output function, and retrieve it later.

There are some special things to note:

In the <img> HTML tag, an image can be directly provided rather than using an external link:

To create a blank image, use the imagecreatetruecolor function:

$img is now a resource variable for an image resource with $widthx$height pixels. Note that width counts from left to right, and height counts from top to bottom.

Image resources can also be created from image creation functions (opens new window), such as:

Image resources may be freed later when there are no more references to them. However, to free the memory immediately (this may be important if you are processing many large images), using imagedestroy() on an image when it is no longer used might be a good practice.

Images created by image conversion does not modify the image until you output it. Therefore, an image converter can be as simple as three lines of code:

If you have an image and want to create a new image, with new dimensions, you can use imagecopyresampled function:

and store the original image into a variable. To do so, you may use one of the createimagefrom* functions where * stands for:

Now, copy all (or part of) original image (src_img) into the new image (dst_img) by imagecopyresampled:

To set src_* and dst_* dimensions, use the below image: 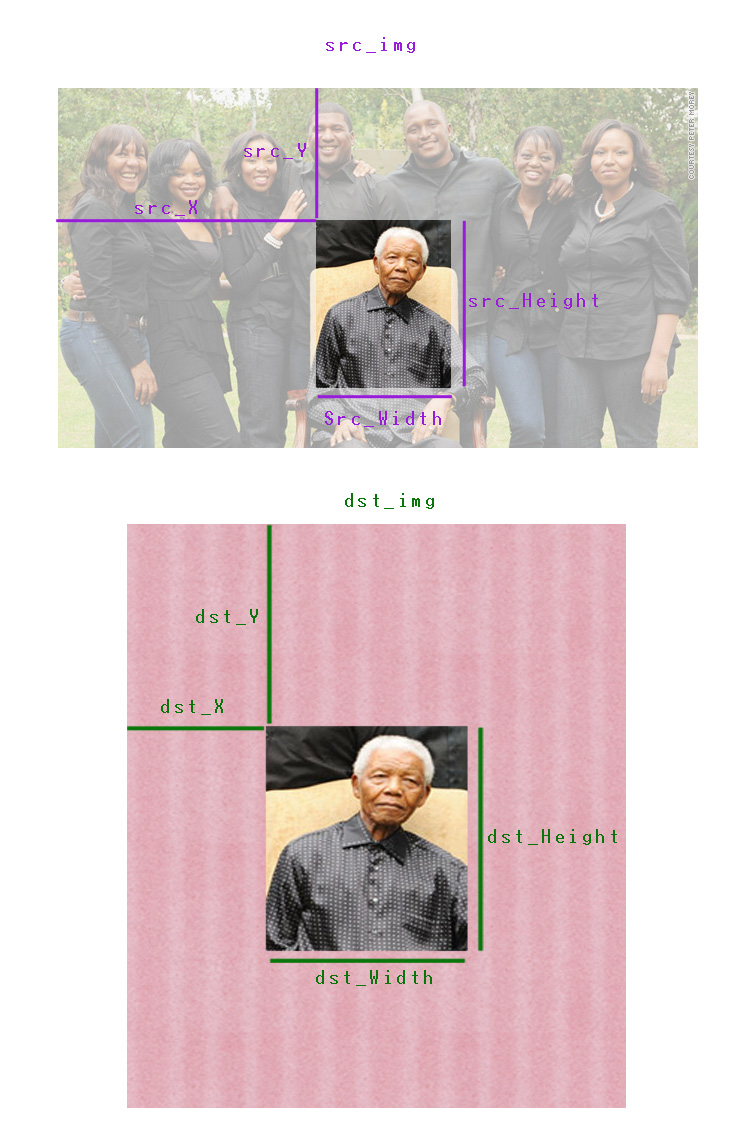 Now, if you want to copy entire of source (initial) image, into entire of destination area (no cropping):

When using header("Content-Type: $mimeType"); and image____ to generate only an image to the output, be sure to output nothing else, note even a blank line after ?>. (That can be a difficult 'bug' to track down -- you get no image and no clue as to why.) The general advice is to not include ?> at all here.