You can do a simple inline equation by using $an equation here$.

which, if we put a little fake text around it, gives

When writing papers or other documents, it is sometimes preferable to have your equations centered and numbered, as opposed to in-line. Then, use the \begin{equation} and \end{equation} commands.

For example, if we use the code

And add a little text around it, we get

You can remove the numbering of the equation by using \begin{equation*} and \end{equation*}.

For example, if we use the code

and add a little text around it, we get

(though it should be noted you have to use the amsmath package for this).

Sometimes, it can be difficult to find the mathematical symbol you need. There are several options here. The first (and quickest) is to use Detexify (opens new window), where you draw the symbol you'd like, and it tries to find what you want, like as shown below:

# Packages available for use

While standard LaTeX is all that is needed for most simple mathematical formulae and equations, sometimes more symbols and tools are needed. There are multiple packages available that will enhance your equations and provide you with more to work with. Three of the main packages are described below. Remember, to load a package, type \usepackage{package} in your document preamble.

The amssymb package provides many extra symbols that can be very handy for more complex equations. The amssymb documentation can be found here (opens new window).

There are also various fonts you can use for your equations, as described on this question (opens new window) on the TeX stack exchange, for TeX, LaTeX, and friends.

This paper is a concise explanation of the different features provided by some packages as well as standard LaTeX; it is very helpful.

Some of the most common commands include: 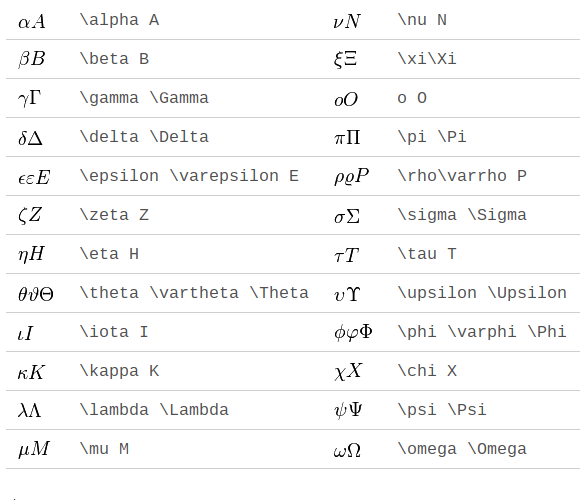 Let's say you cannot find the symbol you need anywhere. You can create a custom symbol. For example, the code

creates and calls a symbol, giving

This is a simpler example; it merely has to rotate an already existent symbol. However, you can create more complex symbols.

This section is in the process of being expanded.

You must always use the amsmath package if you are going to use the following commands. There are four main types of matrix, as shown in the code below:

There are a couple important things to note about this:

Here are some basic ideas to make sure your code doesn't break on you and your equations look better: